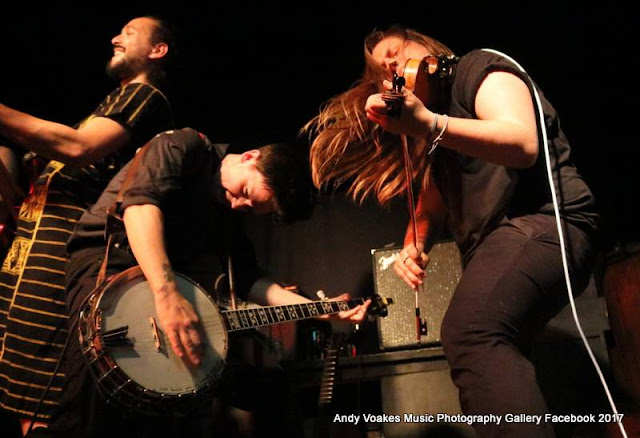 "The Great Malarkey are eight musicians from around the globe – England, Canada, Portugal and Latvia – and they want you to join them on the multicultural train of fast beats and trembling slams of punk-folk spirit." - Rhythm Passport.
I sat down with Alex and Karoline from The Great Malarkey to talk musical influences, hilarious music videos and screaming fan girls!

So you 2 have known each other a long time, how long has it been?

KAROLINE: I think me and Alex have known each other for about 12 years now. We met in typical lesbian fashion – I was dating Alex’s ex-girlfriend…
The Great Malarkey had been around for about 5 years before I officially joined. I’d gone with the band to a festival in Denmark to guitar tech for them and their then fiddle player had to leave before the final show. Alex asked if I could fill in, we had a quick run through in the store room and it was then I was thankful I’d been to so many Malarkey shows.  A few months later I went on tour with them to Denmark again and it was after that Alex asked me to join. I think we were both quite reluctant at first because neither of us wanted it to come between us. I can’t say it’s been a total smooth ride this past 2 years since I joined, but we’ll always be friends first and in some ways we keep each other quite grounded.

ALEX: 12 years bloody hell! We had to have a ‘chat’ beforehand, like a pre-nup. Friendship first etc. Which we’ve deffo upheld, but it’s deffo been challenged as we’ve become more like family, bands are just a bunch of small families.

What was your favourite album of your teenage years?
ALEX: Ooooooosh! Massive question, the one that gave me most of the feels was probably Nirvana Unplugged, closely followed by Nirvana Bleach.

KAROLINE: First album I ever bought was weezers blue album and the second album I owned was spice girls “spice”..... I mean... do I need to say any more?

You’ve got quite a big following in Denmark, and over here in the UK… Do you reckon your fans are predominantly gay?
ALEX: We are very fortunate to have a very diverse following. I don’t think they are predominately gay, but hopefully we are appealing to the community in some way.

KAROLINE: Yeah! We neither hide nor actively promote our sexuality and we’ve not really sought out playing gay events or venues. We have 6 other band members who aren’t LGBTQ so I guess we’ve not really wanted to pigeonhole ourselves. I don’t think our sexuality is why people come to see the great malarkey, but if it is then it’s just an added bonus for everyone.

Do you ever get girls throwing themselves/or their knickers on stage?
ALEX: Hahahaha, Kaz does!

KAROLINE: Despite what Alex says, not once have I had anyone throw themselves or their underwear at me! I can always see the bright eyes of the girls in the front row gazing towards Alex! She’s the front woman and that’s who they fall for! Although if I DID have girls throw themselves at me I’m sure I’d be fine....

ALEX: Marriage seems to de-equip you from handling attention in any way but a slight giggle and run!

You guys get more and more energetic every time I see you, do you ever get to a gig and just think…. I can’t do it tonight! Or does the adrenalin never fail to kick in?
ALEX: The adrenalin you are seeing has been building up since the last gig, on stage is the only release, I mean, I can’t be running round savers in dalston like that…

KAROLINE: Usually when you’re on tour and you’ve been in vans or cars for hours with very little sleep or hungover. But we’re in this band because we love playing music and if you can’t pull yourself together to give the crowd a good show there’s no point being in a band like TGM.

What are the biggest influences do you think, on your music with TGM?
ALEX: Musically, a band called the dead brothers are basically the reason we exist. Topically, there’s plenty, sadness writes good songs and when we are happy, London provides many a tale

Who thinks up the ideas behind your crazy and hilarious videos??
ALEX: 3am backstage after a gig, or in the van decides the vids, there is no actual talent here, just hyperactive drunkenness…

KAROLINE: I agree. Most of our ideas come from really random, ridiculous moments in studios or vans. Most probably something that’s spiralled out of control....

Who is your dream musician to do a collaboration with…. TGM featuring….?
ALEX: Tom Waits or PJ Harvey straight up, no messin’!

Whats next for TGM?
ALEX: After my tea and biscuits? We will keep doing what we are doing until there is no adrenalin left for it.

KAROLINE: Next year is going to be fun! 2018 is full of local shows in London and the UK but we’re hopefully heading to Denmark, Czech Republic and Greece (for the first time) too!

ALEX: We will be gigging all over Europe and the UK, potentially another album, but mostly singing loudly with strangers in dirty bars, like the end of the world is tomorrow.

You can listen to The Great Malarkey’s most recent album Doghouse, here- https://www.thegreatmalarkey.com/listen

Popular posts from this blog

WHERE ARE ALL THE BUTCHES!? 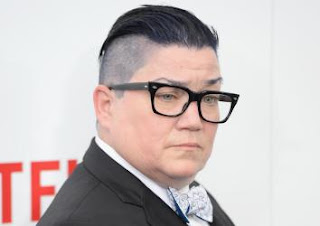 Where are all the butches?! I say this with tongue firmly in cheek. I am not one for labels like ‘butch’ and ‘femme’ as they are just too simplistic for my liking, but for the purpose of this piece, when I say butch, I am referring to the typical stereotype of a ‘butch’ woman or ‘masculine presenting’ lesbian…I find these terms problematic, as who's to say what is masculine anyway? Butch women seem to be the only accepted aesthetic of what a lesbian looks like in the eyes of the public majority, leaving feminine presenting lesbians to eye roll their way through the various series of ‘ you don't look like a lesbian!’ or ‘ I would never have guessed!’ from their ‘surprised’ work colleagues, yet butch woman are so scarcely represented in the mainstream media.   I am not trying to claim that there are no butch celebrities or TV characters at all, but the fact that you can probably count them on one hand is nothing to celebrate. The way I look at representation is throu
Read more 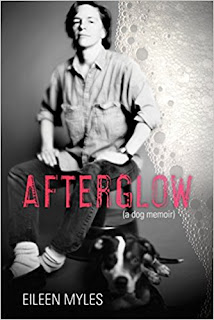 I met with punk poet and writer Eileen Myles after a reading of their new book Afterglow, which is out in the UK in February. As they are an absolute hero of mine, I struggled to string a sentence together, but I did manage to say just how influential Chelsea Girls was for me the first time (of many!) that I read it. A couple of months later, I started thinking about writers that have influenced not just my own writing, but my entire lifestyle. I thought about the likes of Myles, Winterson and Waters and started to wonder, who were the writers that inspired them? What books were the writing that shaped their adolescent years? I got in touch with Myles, who was just coming to the end of their US book tour, and we scheduled to talk the following week. Publishing over 20 books of poetry, prose and fiction over 40 years, I just knew that they would have an interesting and eclectic collection of books that inspire them. So as not to put them on the spot on the day, I asked them
Read more